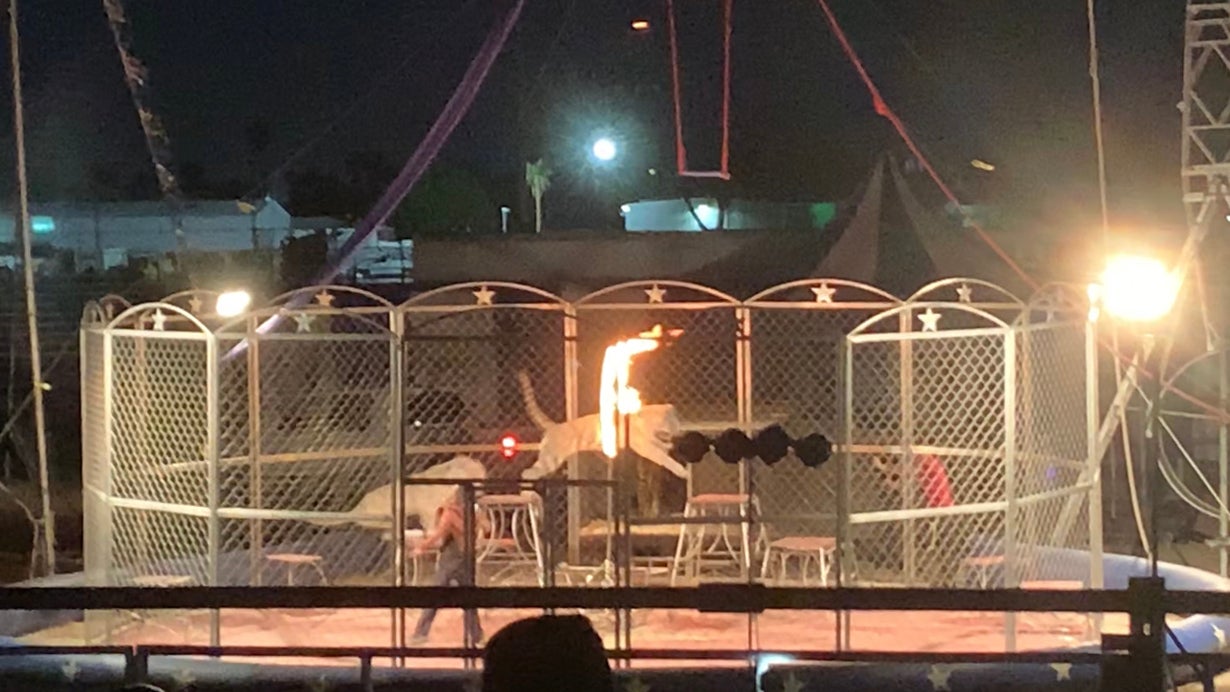 Cruelty At The Circus?

Outside the gate at the Yuma County Fairgrounds, families make their way across the dirt parking lot. As the dust settles, ticket takers let the eager crowd into the venue to find their seats. Among the crowd, parents hand wads of cash to vendors with trays full of cotton candy, snow cones and shiny toys. Ponies and an elephant trudge through the dirt offering rides for a fee.

The KYMA News 11 van zooms past a lone protester standing outside the parking lot fighting for animals’ rights. Discouraged that no one will listen and stand with her, the protester packs up and refuses to give any sort of statement. The only voice for those who cannot speak for themselves, gone.

Would the circus still be entertaining without the animals? While there are plenty of circuses in other locations that do not host animal acts, animals seem to still be the big draw.

“I came so my son could see the tigers,” says a guest.

“My daughter wants to ride an elephant,” says another.

“It’s my son’s birthday and he really wants to see the animals,” offers a mother.

The circus is a tradition that has been around ever since the 1780s and has always been a place where people could see something they have never seen before, but many people are not aware of dark side of the industry.

“To force animals to perform, circus trainers abuse them with whips, tight collars, muzzles, electric prods, bull hooks and other painful tools of the circus trade,” according to PETA Officials. “Circuses easily get away with such routine cruelty because the government doesn’t monitor training sessions and handlers are cautious when they’re in public.”

PETA implies that the Jordan World Circus has a long history of abusing its animal performers and no longer has a license to exhibit their own animals. How they get around it is they now lease their own animals from other exhibitors, so they are no longer subject to inspection.

However, the exhibitors they lease from also allegedly have a history of abusing their animals. For example, the Carden Family, an animal exhibitor who provides the elephants for the Jordan World Circus, has been cited with multiple violations by the U.S. Department of Agriculture, such as failing to provide animals with sufficient space, adequate veterinary care and proper nutrition.

At this local show, the elephant being used came out of a regular enclosed semi-trailer with no windows and no room to turn around.

Many families and visitors of the circus are not considering that the treatment of animals behind the scenes may qualify as cruelty or abuse.

“This is my first time to the circus,” says a father. “I heard about it from Facebook, and I thought it would be a fun place to take my wife and children.”

Later in the evening, the crowd watches as six tigers are shoved out of their transport container and into the center ring to perform. During the performance, while the trainer slings the whip at them, the tigers are made to jump through a flaming hoop and one nearly misses as it scrambles through the flames. Moments later, the tigers are put back into a dark trailer waiting for their next performance.

After witnessing tigers jumping through hoops and elephants doing handstands, families make way their back to their vehicles, not considering treatment of the animals they just enjoyed and indifferent to the protestor who was outside the parking lot hours earlier.