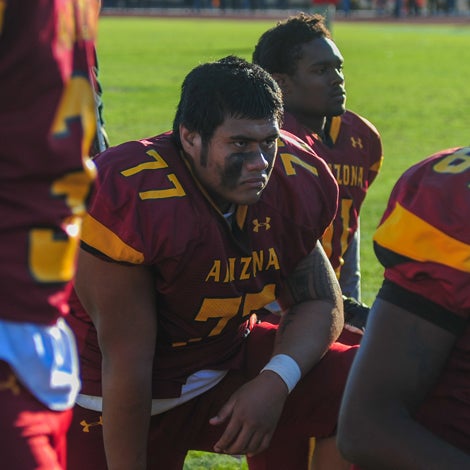 The Matadors started with the ball and controlled the rock for the first six minutes of the game. AWC closed out the drive with a 30-yard field goal from kicker Tyler Blackburn to take the early 3-0 lead.

The Broncos added one more touchdown in the first quarter and another early in the second to take a commanding lead at 20-3.

Arizona Western responded with two touchdowns within one minute and seven seconds of one another. The first was a 40-yard TD scamper from Ramon Alton. Tyler Blackburn missed the PAT wide left to make the score 20-9.

AWC scored just a little over a minute later with a Dominique Blackmon 39 yard interception returned for a touchdown making the score 20-16 headed into halftime.

The second half was then owned by the NMMI Broncos. They scored another touchdown from Quinn Billerman to Delvon Carpenter from 12 yards out early in the third quarter.

Carpenter finished with 12 receptions for 166 yards and three scores after missing the previous meeting earlier this season between the two schools.

The Broncos added a 22-yard field goal from Hunter Heck in the third quarter and got a safety on a Joel Maddock punt that went straight in the air and the wind blew it straight back and out of the end zone.

The 2013 Fisher Automotive El Toro Bowl concludes the Matadors season. The 2014 season is scheduled to begin Saturday August 23rd, when the Matadors host NMMI in a rematch of today's game. Kickoff is TBD.