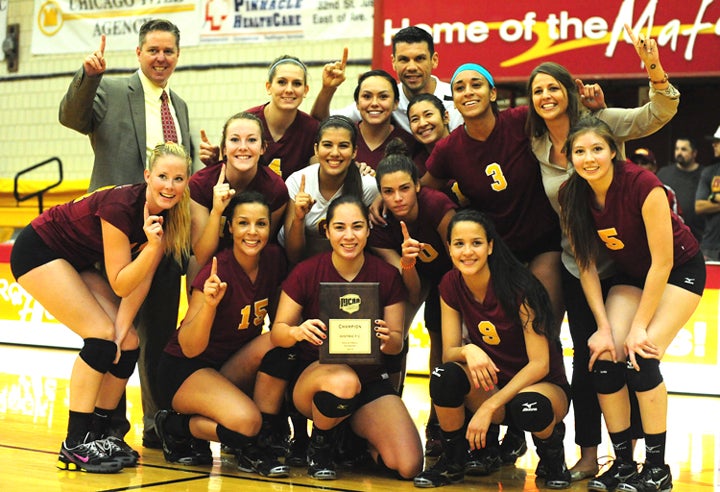 Four years into Jason Smith's second stint as AWC head volleyball coach, he has the program flying high. The Lady Matadors reached the NJCAA National Championship Tournament after a stellar season that saw them go 20-6.

Smith's talent as a coach was officially recognized by his peers this season by taking home the District C Coach of the Year award. Smith is quick to defer the accolades to his players, saying that it was the player's effort and commitment to the season that won him the award.

While his players deserve some recognition for it, the award also highlights one of Smith's other unique skills. He's an experienced and gifted recruiter.

Prior to coming to AWC, Smith spent three seasons as an assistant and recruiting coordinator for the University of Utah program. The recruiting classes that he helped bring in were nationally recognized and helped the Utes win two Mountain West Conference titles during his time there.

Since returning to AWC for the 2010 season, he has continued to show his recruiting savvy by finding talent all over the world.

The 2013 Lady Mats were no different. The roster included players from Brazil, Mexico and the conference player of the year, Maria Del Mar Guzman Franco, who hails from Cali, Colombia.

AWC started this year's campaign strong, storming out of the gates to a 5-1 record before a couple of tough losses. "I knew the first six matches were going to be really tough," Smith said. "My thought was, if we can go 4-2 or 5-1 in our first six, then we'd have a really good chance to win the conference."

Once the middle part of the schedule hit, the Mats really found their groove winning 10 of their next 11 matches before a close loss to conference rival, Central Arizona, at home on sophomore night.

It was a spectacular run for this close-knit group that saw them rise all the way to No. 11 in the national rankings. After avenging their late-season loss to Central Arizona to claim the Region 1 Championship, AWC took care of business against Redlands (OK) Community College in the District C Championship with both matches being played at "The House" on the AWC campus.

"When we went to Nationals, we were 19-4 and in two of those loses we had match point and lost in five. There was really only one match all year that it was kind of like, okay, what's going on here?" said Smith. "I felt like we dominated the season."

Full of confidence after winning the conference, region and district titles, the Lady Mats headed into the National Championship tournament as the No. 8 seed, facing a tough opponent in the No. 9 seeded North Idaho Cardinals.

AWC played hard, but eventually fell to the Cardinals in three sets, 24-26, 22-25 and 17-25. The defeat knocked the Lady Mats out of the championship bracket and ended their dreams of a national championship.

With their title hopes dashed and subsequent relegation to the consolation bracket, the team was understandably deflated. "Once you lose the first one at Nationals, you just don't know where the motivation is going to come from. A lot of teams experience that," said Smith. "You're talking about quite a few months and a lot of hours of effort towards a goal and then it's not there anymore."

Despite the inevitable emotional hangover, the team responded the next day with a convincing win over Gadsden State before their season finally came to an end with a loss to a New Mexico Military Institute squad that the Mats had previously fallen prey to in an early-season tournament in Scottsdale. "I was happy with how we played at Nationals. We probably could've done a little bit better, but there's no reason to nitpick when you've had that much success," Smith said.

Regardless of the tournament's outcome, Smith understands what these women accomplished. "Our buy-into being a great team was what the real thing was, you could just see in other teams that they didn't believe. We believed," Smith explained. "We started the season with the goal to be at Nationals, and we ended the season at Nationals."

Smith admits that at this time of the year he's usually a little panicked about next year's roster, but this time around, that's not the case. "You've got to like returning the conference player of the year," said Smith, referring to Guzman Franco, who was also honored as First Team All-American. "I've never had an All-American that was a freshman," Smith boasted.

"I feel like we're returning the best setter in the conference. I feel like we're returning the best libero in the conference, and Gabby Diaz, who's from Brazil, started off a little rough with the English barrier, but finished really strong," Smith said. "Also, Zaylen Miller, who is such an outstanding teammate, played a lot of different roles for us. Between those five, we just need two or three players to bring in and we're looking really good."

Based on Smith's track record, you can bet he'll find the recruits he needs to chase that elusive national championship.