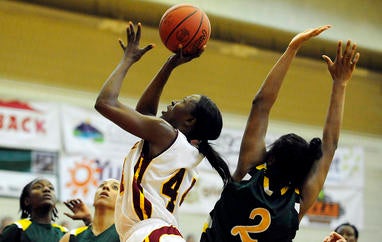 Many moons ago, the basketball deities opened up the heavens and shone down upon "The House" on the Arizona Western College campus. Out of that golden ray of light, a tall figure stepped forth named Jolie Olingende.

Today, Olingende is the only returning player on a team that has torn its way through the 2011-12 season, collecting a couple of 11-game win streaks along the way.

"We are more confident -- like last year," reports Olingende, last year's ACCAC Freshman of the Year. This is a lofty comparison, considering that last year's Lady Matadors won 30 games and went to the region final.

Olingende believes that some of this season's success is based on a slightly different approach by Lady Mats head coach, Patrick Cunningham.

"[Last year] we had 19 players, but this year, Coach did something that I can say was new, with 11 players," Olingende explains. "I think it came out good."

With a nearly complete overhaul of the roster, Cunningham has proven that he and his staff's recruiting abilities are in peak form. Cunningham, however, will be quick to defer all accolades to the players.

"We have one returning player," says Cunningham. "With a new group of players, I'm pretty proud of the way they've come together."

"Of course, it always helps when the returning player is probably the best player in the league," he adds.

The Lady Mats have had three conference Players of the Week, which shows just how balanced they have been this season.

Jade Washington, a freshman guard out of Las Vegas, Nev., one of the players to win the award, has surprised a lot of people coming back from a knee injury she suffered in high school.

With her gritty play and the way she can fill up the stat sheet, Washington has raised more than a few eyebrows among opposing coaches this year.

Longomo, who grew up with Olingende in Africa, is extremely long and is a tough defender. Her outside shooting has become a serious weapon for AWC and helps to clear space for Olingende inside.

Cunningham knows his team can score, but says they hang their hat on the defensive end.

Keeping opposing coaches up at night, the Lady Mats' full-court press is very intimidating with their length and athleticism. Their pressure defense creates a lot of turnovers and a lot of easy buckets.

But when things bog down, Olingende is as close to automatic as you can get. She has a great feel for the game. Her offensive skill, her hustle defense and her vocal leadership on the court have given AWC another promising shot at a region championship.

Standing in their way, should they get that chance, is perennial powerhouse Central Arizona College, who has already advanced to the region title game.

CAC has swept the season series with the Lady Mats, but that has only motivated Cunningham and his squad to get that third and decisive match-up in the championship game.

"If we get to the championship game, we like our chances," ," says a confident Cunningham. "We've lost twice to them, but we feel like we can compete with them.

It just comes down to who is going to execute in the last five minutes of the game."

Although the team is hungry for that rematch, you can bet your last dollar that Cunningham won't let them get distracted from the here and now.

Cunningham has consistently preached, "Our whole thing is to get to the last five minutes of the last game, and then try to play your best basketball." The Lady Matadors know there is still work to be done but look forward to putting Cunningham's mantra into practice.

Cunningham has seen this team come a long way and couldn't be more excited for them.

"It's a good group of kids," he says. "They've really done a good job of developing good chemistry on the floor and off the floor, so you're rooting for them."