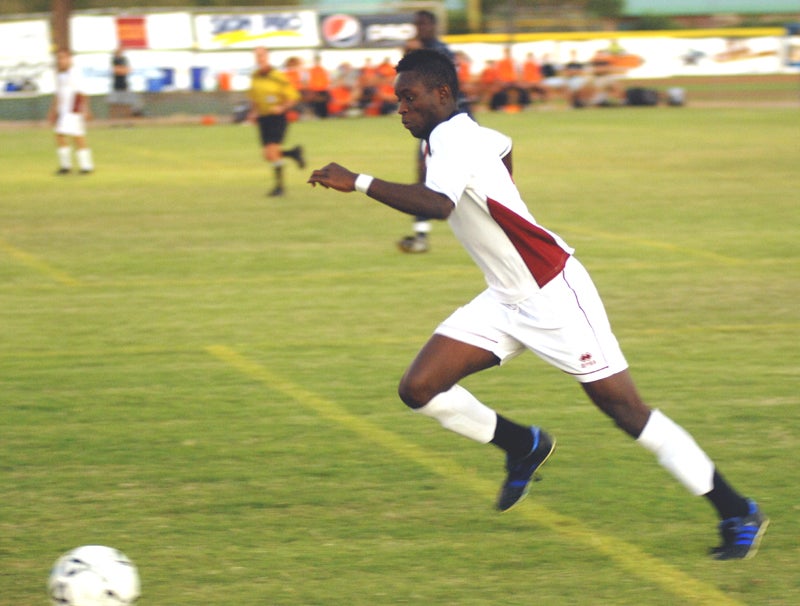 Matador Soccer team sets record for most wins in a season

As the NJCAA men’s soccer season kicked off on August 28, the AWC Matador team ranked 8th in the nation and 1st in the ACCAC conference. Now, with 154 conference wins this season, they set the record for most ACCAC wins in a season in team history.

The Matadors began their season opener away against Scottsdale Community College, but lost 0-3. Coach Kenny Dale remained optimistic, though. “It was the best we’ve played since we arrived in August, and the score doesn’t reflect what kind of a game it was.  We made very few mistakes, but Scottsdale capitalized on just about every one of them,” he said.

The Matadors got their first win of the season on home ground by beating Paradise Valley Community College 2-1 after going down by a goal. Mohammed Takiyudin and Jose Monterroza scored for the Matadors.

The third game was at home against Yavapai Community College. The Matadors, who have managed only one win in the last 16 years against Yavapai, were determine to get even. They came back from a goal down to win 2-1, with Randy Folger scoring twice for the Matadors.

“This is one of the best games the team has played against Yavapai in recent time,” said Coach Dale. “I’m happy we won and made history.”

The Matadors were then on the road to Glendale Community College for their fourth game. It was an all-star performance for AWC beating Glendale by a stunning 8-2. Alex Chain, Mohammed, Vitalis Atemafac, Soto, and Julio Monterroza each scored a goal, and Jose Monterroza scored twice to finish the spree.

“It is an improvement over the last game, and now the guys are getting use to each other and the tactics we play” said Coach Dale. “I am happy for the Monterrozas because they are the first brothers to score for the school.”

The Matadors recorded an impressive win over Pima Community College in Tucson by 3-2. Goals from Smyth, Vaquero and Folger did the damage for AWC.

On September 13, the Matadors return home to play Phoenix Community College in high spirits after beating Pima in their own back yard. But the game ended 1-1 after overtime, the first tie for the Matadors this season.

“It’s not bad, but I will say we were unlucky not to win today because the guys played really well,” said Coach Dale.

Unstoppable on the road

Chandler Gilbert Community College was next, an impressive performance by AWC, who won 3-2 in overtime. Goals from Anani, Soto and Mohammed in overtime broke the heart of the home fans.

“I am really excited we won because we have not won here in Chandler in four years,” said Dale.

South Mountain Community College was next to taste the wrath of the Matadors, who appeared unstoppable on the road after this 4-0 win.

“We are getting better after every game, and the boys have to keep the same level of play because the season is not even half way through,” said Coach Dale.

The Matadors hosted and won over Gateway and Mesa Community Colleges on home ground bringing the overall rankings to 8-1-1 by the end of first round of the season.

On October 2, the Mats six match winning streak snapped at Yavapai College with a score of 1-2. Coach Dale stated, “Yavapai played very, very hard.  We wound up a little unlucky, since (Auston) Smyth had one that came off the crossbar, and looked like it was going in but didn’t.  We played pretty well, and had our chances to win, but were just a bit unlucky.”

Randy Folgar put the gamewinner through with :30 left in Glendale and, on October 9, Omar Soto scored with a pair and  AWC defeated the Pima Aztecs at home 4-1, claiming the top position of the ACCAC Conference and moving up in the national rankings from 9th place the previous week.

The Aztecs, who had been scoring leaders of the ACCAC Conference, now drop one point behind the Matadors and their 34 points on the season.  The ACCAC standings are still very close, however, with Chandler and Yavapai at 30 points each.

On October 11, however, the Phoenix Bears scored near the end of the second overtime to knock the Mats out of 1st place with a 1-2 score. The Mats ranked 12-3-1 for the season.

The Mats went on to win the next three games with Mohammed Takiyudin scoring two game winner goals in Chandler/Gilbert and South Mountain.

So, after an awesome 4-1 win over Pima, the Bears knocked the Mats out of ACCAC 1st place ranking with that tie. Not ones to accept defeat, however, the Mats dived in, determined and focused, to gain back their number one ranking with a win at South Mountain.

The Mats then set a team record for most ACCAC wins in a season with their 3-0 win over Gateway Community College in Phoenix last night. They have one game left in Mesa Friday night before regionals begin.

Coach Dale, in his sixth year as AWC as Head Coach, has put together a very complete team in all aspects of the game. With a strong defense and the best offence ever, and with players from all around the world, isn’t it time to dream of The National Championship? With a ranking thus far of 15-3-1, there is a good possibility.

Click on the following link to see a table for 2010 Men’s Soccer standings as of October 17.