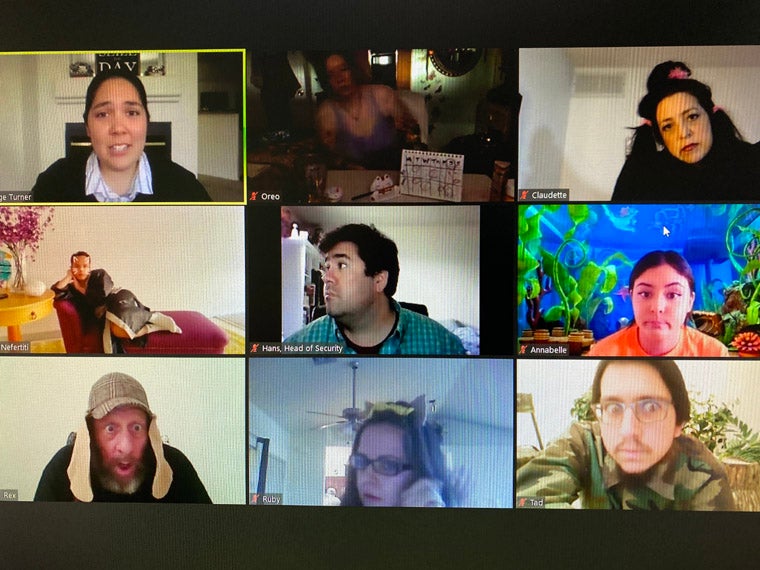 YAC checks in on pets

. As the COVID-19 pandemic has halted most public entertainment, the Yuma Art Center felt the need to put on a fun skit to lighten everyone’s mood and show that the arts are alive and well. The result was Pets in Quarantine, a new play by Stephen Murray.

Due to social distancing guidelines, YAC had to get creative and, as with most productions these days, they went virtual. The show was streamed through Facebook and reached a peak of about 100 viewers.

YAC wanted a silly skit that was relevant to what everyone is currently experiencing.  The director and producer, Lilian Morrill, along with all of the people who worked on the production did a splendid job under the difficult circumstances.

“It was a small production, but it was fun, and I’m proud of the actors for being able to adapt in these odd times,” said Morrill.

Due to the CDC’s guidelines for social distancing, this wasn’t a traditional show with a stage that had characters engaging with one another face to face. The cast never got together physically but instead recorded their parts separately, and the segments were assembled in postproduction.

The skit is about a news reporter, played by Erin Natseway, who interviews several pets during quarantine to see how they are coping and handling their owners being home more than they’re used to. The characters include Nefertiti, a spoiled cat played by Matthew Powell; Tad, a lizard played by Jacob Natseway; and Claudette, a French poodle played by Yara Nash.

“It was different but unique because I really had to get into my character since it was just me and the camera,” said Jackie Garza, who played Anabelle, a goldfish afraid of people who constantly touch her bowl.

The skit was in the style of a Zoom call to poke fun at the fact that it’s become the new norm for school and business meetings. The format worked fine even if the animal filters and background were sometimes glitchy. The script was cheesy and silly, but in a good way. This show wasn’t meant to be taken very seriously, appealing mostly to families and younger audiences.

The virtual format posed unusual challenges for the actors as they didn’t have the support that comes with having a set, lighting and other features that normally accompany a live show.  Without the usual trappings of a physical space, the skit relied primarily on the actors’ performances. On the plus side, since the show was prerecorded, they were able to perfect their part through multiple takes.

Some of the actors wore costumes to show what animal they were playing while others simply had a green screen as their background. As a group, they did a phenomenal job bringing their character to life, bringing humor to the characters by using funny voices and facial expressions. In her part as a fish, Garza was hilarious in expressing wacky expressions and a quirky personality as she virtually chased bubbles.

Pets in Quarantine was a fun and goofy production that got the YAC back in the swing of producing shows.