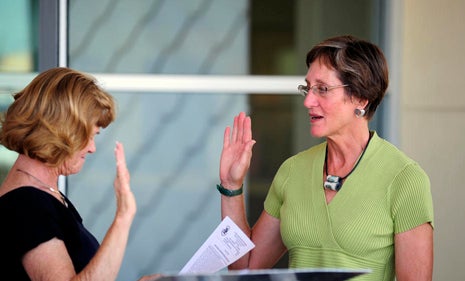 JoAnne Ehasz is the newest member of the Arizona Western College District Governing Board. Ehasz was appointed by La Paz County School Superintendent Janice Shelton to replace Randy Hartless, who resigned in May due to family reasons. This position represents La Paz County District 1. Ehasz who was sworn in Aug. 1, will complete Hartless's elected term, which ends Dec. 31, 2014.

Ehasz brings to the Board a breadth of experience. She received her B.A. from the University of Minnesota School of Management. She has served on the Western Arizona Vocational Education Board for the school districts in La Paz and Mohave counties.

Ehasz is currently the Director of Medical Staff at La Paz Regional Hospital. She previously held the position of executive director at the Lafayette Development Corporation Board in Darlington, Wis.