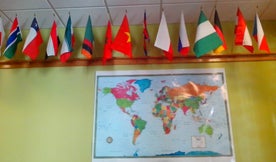 In Asian countries, most people believe that Spring Festival is the well-deserved king of festivals. Others, though, would give the title to Mid-Autumn Day, a festival that invariably makes Asians abroad miss their motherland.

Mid-Autumn Day, which has been with Asians for centuries, became symbolic of people returning to their families. Now, with the cultural convergence that comes with science and technology, people from around the world take part in celebrating this Festival of the Moon.

Here at Arizona Western College (AWC), for example, where the many international students always introduce each other to their countries' festivals, they celebrate the ancient Moon Festival together.

Ken Kuntzelman, director of the International Students Program (ISP), has made plans to celebrate the Moon Festival in the 3C building with his students.

Because celebrating Mid-Autumn day has become an important part of the international student program, "Mr. Ken" invites American students to join in the festivities as well as discussions about the different cultures, and he provides an international art room containing different history stories cards.

"We want to let students share their stories so that we can get knowledge from each other," said Kuntzelman.

Out to accommodate the students from different counties, many traditional foods will be prepared -- for example Moon cake and milk tea from China, rice cake from Japan, and a special salad from France.

Reason for the season

"The Chinese created a story of nine suns to symbolize the great difficulty in life," said Wang. "We literally need to go back to the ancient time and enjoy the old story."

According to Wang, about five thousand years ago, there was a great hero in China, a famous marksman named Houyi. With his bow and arrow, he shot down eight suns to protect the Xia Dynasty. During the shooting of eight suns, his wife provided food and water with great love to help him.

One day, when the great hunter went out to work on the farm, a villain came to his home and asked for the medicines. In order to protect the precious potions, Houyi's wife took both doses herself.

"At last, his wife went to the moon by herself, so they were doomed to miss each other forever," said Wang.

"It's a good story that can make everyone miss their family members on Mid-Autumn day," said Kuntzelman.