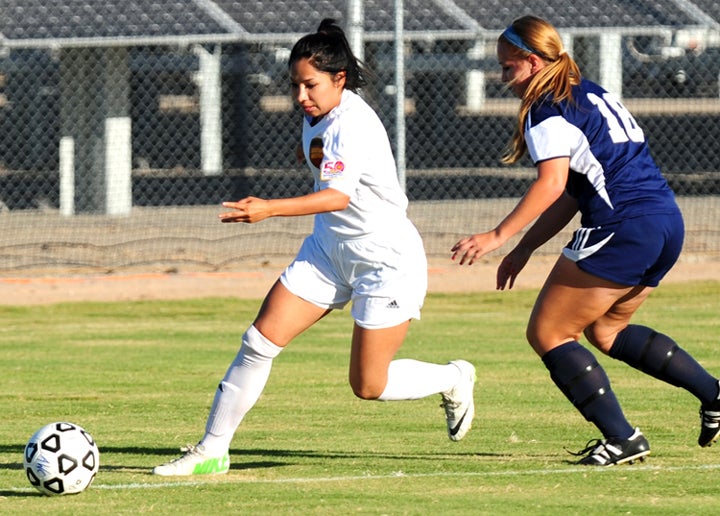 Until the last whistle blew

Until the last whistle blew, both men and women played their hearts out on the field this 2013 soccer season. Both men and women were brought together in August for preseason at the Salt Lake Academy in Casa Grande, AZ where they learned to become not only a team but also a family.

The boys had a bumpy road at the beginning of the season not being able to keep a shut- out along with losing several games. However, that did not stop them from fighting for the playoffs. Once they began to play as a team and communicate their winning streak began. The Men's soccer team ended their season in the semifinals losing against Phoenix College for the third time with 2-1 score, at the home of the Bears. "I am very proud of my team and even though our season ended here I still believe I have the best team in the conference," said Captain Julio Castillo. Unfortunately, that was the end for Matadors who returned upset. However, they held their heads high due to the successful season they had. The men had a record of 11-4-2, which motivated our women's team to end with the same success.

The Lady Matadors not only surprised everyone in the conference but also gave high expectations for women's sports at Arizona Western College. The Lady Matadors came together in their first year to prove to everyone that even though they were a new team, they would be hard to defeat. Lady Matadors ended their season with a 15-5-1 record qualifying for their first round in playoffs. Unfortunately, the first round was where their journey was cut short, losing against Cochise College 4-2.

Even though, the Lady Matadors season ended a little short they are proud of their record that impressed the entire community due to the fact that they were the first women's team in the history of Arizona Western College. Even though the season was cut short for our soccer players, Coach Kenny Dale was proud to announce his two captain athletes for the month of November were goalkeeper, Carolyn Sosa, and midfielder, Julio Castillo. Head Coach Dale was also proud to announce several of his players made first and second team in the conference, from his male and female teams. (First team- Julio Castillo, Arturo Valle) (Second team- Jaime Verdin, Fernando Alvarez, Etiando Tavares, and Paola Espino)

The first woman for AWC Women's Soccer team was Greta Espinosa an International Student from Tijuana Mexico. Greta played a variety of positions this year for AWC. She played center-mid fielder most of the time. Wearing the number "8" this season, Greta thanked her team for the recognition. "I'm very happy and proud of my girls because without them I would have never gotten this recognition," said Greta.

Greta Espinoza expresses how proud she is about her team and how she thinks with time it will only get better for AWC soccer. Greta stated "I think we all did a great job as a team this season and I'm proud to be a Matador". Even though the season was cut short not only for the men but the girls our athletes are proud of being Matadors.

This season could have turned out different. However, with the hard work of our athletes it was a great one. "I believe next year will be a better season because we have many returning players and we gained experience as a team," said Greta.

The Matadors are looking forward to start their off season's practice when they return from the holidays. They will work hard to make next season worthwhile.