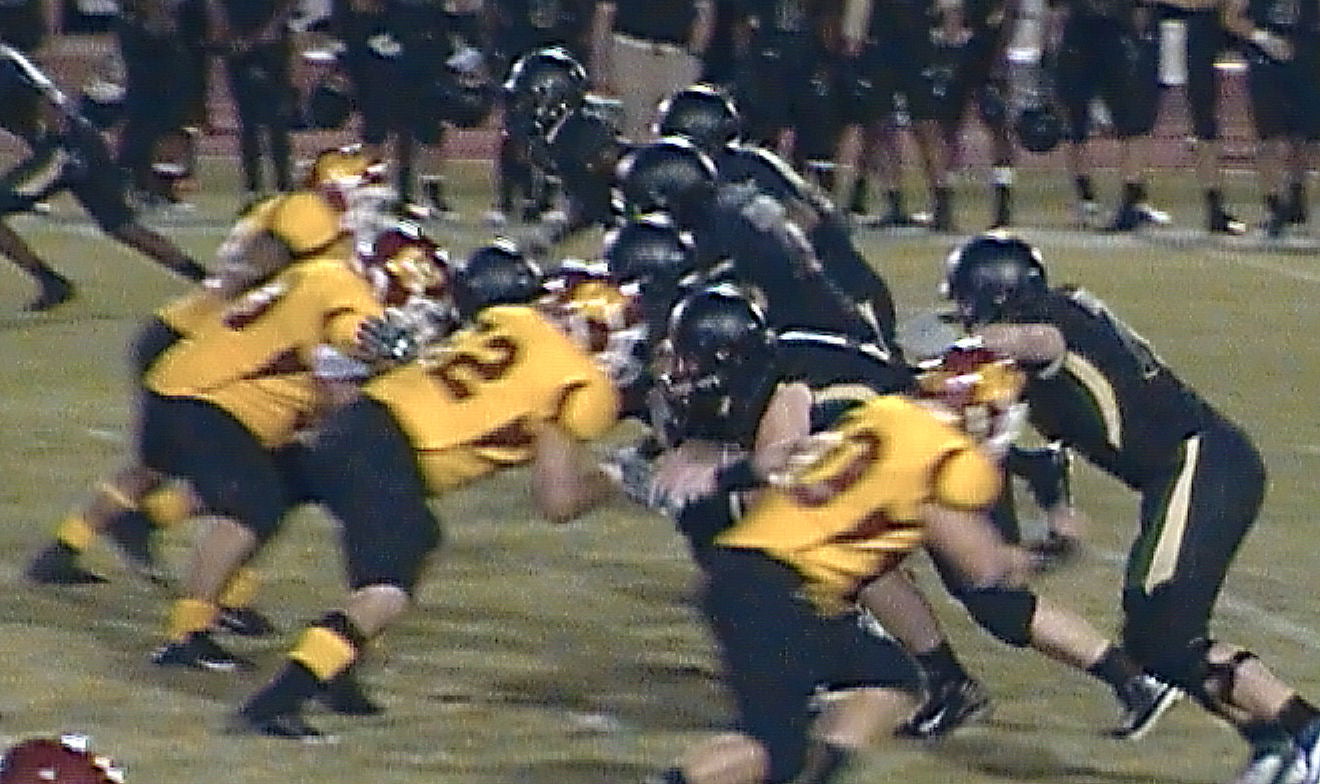 Impressed. That's how the fans felt after watching the Matadors take it to the #1 nationally ranked defense Scottsdale Arti"chokes" Saturday night with a convincing 55-21 win. The Matadors had all eyes glued to the field from the first 25 yard touchdown run by Damien Williams within the first two minutes of the game to the final one from inside the 10 by Theodore (Teddy) Monroe with less than one minute to go.

Don't think that the 34 point lead meant the Chokes were not making much of an effort, though. They tried. But, the Matadors gave them a pounding with body slams we could hear from clear over on the other side of the field.

Early in the 1st quarter, the Chokes capitalized on a bungled punt by the Matadors and ended up with the ball at the 3 yard line. They then grabbed their first touchdown to briefly tie it up at 7. But after that, it was all Mats.

Running and passing, the Mats moved the ball well against an over matched Chokes defense. Yuma's homeboy, J.C. Baker, powered it through to score the second touchdown for the Matadors. Then, quarterback Cameron Coffman threw an impressive 65 yard touchdown pass to Deëjoshua (D.J.) Johnson to end the first quarter at 20-7.

Big guy Sam Wren had a good fumble recovery to start off the second quarter.

The Matador fans went wild when D.J. Johnson ran 78 yards to make a touchdown only to be given a 10 yard penalty for an illegal block. That was the first of many calls that had the fans yelling at the referees the rest of the night and our players fired up to do some real battle.

On offense, receiver Josh Ford fought for every inch throughout the game. Too far to kick into the wind and too close to punt at the Chokes 36, they went for the 1st down on 4th and short and Cameron Coffman ended up tossing the ball to Ford as he broke free for another 30 yard TD pass.

On the ensuing possession, the Chokes drove 70+ yards, capped off with a 19 yard touchdown pass to give them some hope as the half ended at 27-14.

The second half started with the fans fuming at a pass interference call. The whole 3rd quarter was marred by a lot of untimely penalties and sloppy plays with the loyal fans trying with all their might to defend their guys.

Things started looking up when running back Damien Williams took a direct snap and scrambled right up the middle for a 69 yard touchdown on 4th down and short. That put the Mats up 34-14.

Josh Ford scrambled for 70 yards from the Mats 20 all the way to the Chokes 10 to end the 3rd quarter.

The 4th quarter began with Emmanuel Bibbs catching a 6 yard touchdown pass from Cory Lockman to make the score 41-14.

With a lead that showed little hope for the Chokes, the Mats still fought the 4th quarter without letting up. I realized then that the Mats didn't just want to win, they wanted to slaughter.

The Chokes were deep in Mats territory when linebacker Steffon Martin intercepted and brought it back to the Mats 46 when the laundry hit the field once again. There were two personal fouls on the Chokes, moving the ball all the way to the Chokes 24. The fans danced and cheered that a penalty was finally enforced against Scottsdale.

D.J. Johnson returned a punt 67 yards for a touchdown, but he really ran 100+ when you add up all the juking and jiving he did running laterally. It was a thing of beauty; running laterally, one side of the field to the other, he alluded and shed tackles from all angles. It would be hard to choose the play of the game, but this run would have to be a candidate.

Some of the Mats starting defense were getting a rest when Chokes quarterback Hunter Young tossed a 17 yarder to wide receiver Martwon Weaver with less than two minutes left in the game for a cosmetic TD.

Teddy Monroe provided the last TD of the night from inside the 10 for a final 55-21 drubbing of the previously undefeated and highly regarded Scottsdale Artichokes.

If you are interested in edge of your seat entertainment, this is the place to be. Their fighting spirit and talent on the field is awesome to watch.

This is Homecoming week at AWC. The homecoming game will be October 1st at the Veterans Memorial Stadium with a pre-game presentation starting at 7:00 p.m..

On Sept 27 stop by the 3C Eatery from 11:30am to 11:45am to show your homecoming spirit! Take pride in being a Matador and support our fall athletes.

These guys are well worth it.