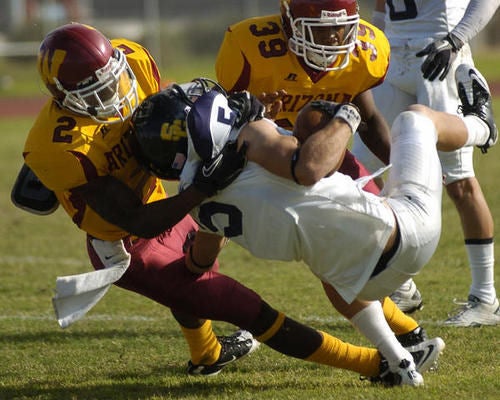 The 2010 football season at AWC kicked off with a bang and ended strong. With only one loss against Glendale Community College, the Matadors made their way to a bowl game for the second year in a row, something they haven't done since the early 1980's.

Starting off the almost-perfect season was a 49-15 win against Monterrey Tech, in which Reggie Bullock and Daniel King each scored a notable touchdown run. The most yardage for a touchdown run came from Damien Williams in the 2nd quarter.

For the first game of the season, Head Coach Tim Minnick said, "We played undisciplined football in the first half," but the team made up for it in the second half.

Among the many significant wins during the season, standouts include the two in which the Matadors kept Green River Junior College and Eastern Arizona Community College from scoring at all.

The win over Green River JC Football will be especially memorable as a 70-0 slaughter, with the Mats scoring 21 points in each quarter except for the third. This game even topped the 1999 win over Eastern Arizona, in which AWC scored 69 points.

The 28-25 win on the road against the Broncos of New Mexico was the closest of the season up to that point and brought the Matador's WSFL record to 6-1. The first quarter started off great when Boomer Green, quarterback from Modesto, Cal., completed a 10-yard touchdown pass to fellow sophomore Reggie Bullock. Coach Minnick called the game "ugly," but he was grateful to travel so far for this game and still win.

For the second year in a row, Bullock has proved to be a vital asset to the team. The Las Vegas, Nevada native has been one of the top rushers for every game this season. In the game against Phoenix College, he saved the day with his 197 rushing yards. He was named the WSFL Offensive Player of the Week for the week of Oct. 24, his fourth such honor in two years.

Other WSFL Offensive Players of the Week this year from AWC are Damien Williams, Zach Quines and Isiah Wileys, with Williams winning for three weeks consecutively.

In the end, the Matadors, who haven't had a 10-win season since 1972, are WSFL champions for the second year in a row.

In the Dec. 4 CHAMPS Heart of Texas Bowl, played in Copperas Cove, Tex., the Matadors, rank 4th in the nation, play 16th-ranked Blinn College to cap off an outstanding year. Matador Football shines in 2010