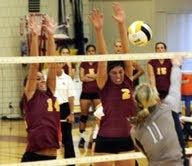 As the season began, the Lady Mats where nationally ranked for the second straight year, this time in 21st spot.

The season started for the Lady Mats on August 14 with a preseason Jamboree at Gilbert Community College. Coach Jason Smith began his second stint in charge of the team, having been the coach five years ago.

In the first game of the season, the team got off to a good start with a 3-0 win over South Mountain at home on the AWC court.

"All the players came out excited at home," Thaci Pereira said. The sophomore lead the game with 13 kills.

"The win was mentally big for the girls," freshman Megan Knapp said after the win. "Beating and coming from behind against a strong team like Scottsdale gave us belief for the season."

Community College Tournament and beyond

Heading to the Salt Lake Community College tournament with confidence after starting the season with two wins, AWC played the defending national champions, Southern Idaho. The Lady Mats knew it was going to be a different game, realizing they had to work hard to come up with a win. At the end, they lost in a long five-set match.

"We really improved our overall level of play today," Coach Smith said. "We played the two teams that played in the national championship game last year. We had more focus than previous games, and it showed tonight."

After a good Friday, the Lady Mats still had two games on Saturday.

After 3-0 losses to both North Idaho, 11th in the nation, and North Eastern, Thaci Pereira said,"Everyone was really tired after Friday's games; we just let ourselves down today,"

After a tiring, tough tournament against good competition, the Lady Mats played Chandler Gilbert away, where their fast start turned to four-game loss.

At the Scottsdale Classic tournament, the Lady Mats won the first two games against New Mexico Military Institute (3-2) and Mesa (3-0) but tired late on the same day, losing against Snow College in five games. The next day, they played 11th-ranked Florida, losing in four games. The last game saw the Lady Mats get a five-game win over Central Wyoming

"Overall, we did not play too well this weekend, but we should note that we can be a pretty good team when we are in the control of our mental and emotional games," Coach Smith said

Rounding out the season

Back to the season at home, the Lady Mats played Yavapai, losing 3-1. The girls bounced back with confidence, winning a four-game match over Phoenix College.

"Right now we play better in practice than we do in games," said Coach Smith.

It was "far and away the best game we have played all year," according to Coach Smith. "The girls stayed together, played as a team and showed confidence."

Then the Lady Mats put together their best stretch of the season, winning ten games in a row -- Pima twice, Glendale, South Mountain, Yavapai, Scottsdale, Mesa, Chandler-Gilbert and Phoenix.

The streak snapped with a 1-3 home loss to Eastern in an important match that would decide home court in the Region final.

"We played fairly well tonight, but did not take care of the small details well enough to finish and win," said Coach Smith. "Eastern is a very good team and they were sharper tonight than in September."

After a big loss, they bounced back with a comfortable 3-0 game, focusing on the playoffs which the Mats have not played in for two years.

Rounding out the regular season, they played Pima away, winning 3-0 at home on Sophomore Night, and then won 3-0 over Glendale.

"It was great to get a win in three on Sophomore Night," Smith said. "I was very proud of the girls finishing each game strong. These sophomores have all been through so much over the last 15 months, and I am very proud of how well they have accepted my demanding style of coaching."

Making it to the Finals

With the regular season games split 1-1 between the two teams, it was the game many expected. Eastern came out with a big, loud crowd. The intimidating environment ended up being too much for the Lady Mats, who lost the final 0-3; 23-25,23-25 and 20-25.

"We put too much pressure on ourselves and the momentum swing in the second set really hurt, being up 7 points and losing," said Pereira. "We played pretty well tonight, but had too many ragging injuries to compete with a school like Eastern.

"They played great and deserved the win," Pereira added. "We wish them luck in district finals and we will be back next year.

In the final standings, Andrea Marshall made 1st Team All Conference, and Thaci Pereira and Bel Fakaosi both made 2nd Team All Conference. It was the icing on the cake after a great, hard-fought year. Lady Matadors Volleyball Season Coach Smith said, "We played the two teams that played in the national championship game last year. We had more focus than previous games, and it showed tonight."