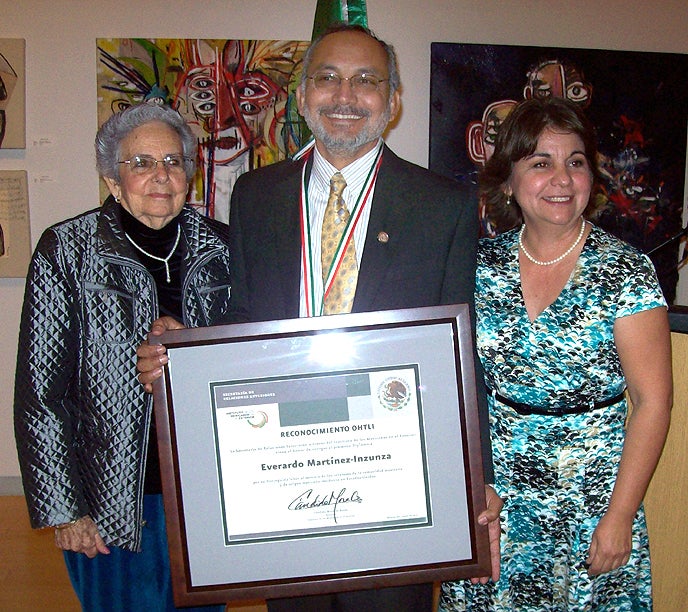 On January 19, 2010, Everardo Martinez-Inzunza ,  Associate Dean for South Yuma County Services at Arizona Western College, was given the Ohlti award in recognition of his service to the Mexican community.

The Ohtli is given by the Mexican government to individuals in the United States who have assisted in opening and developing pathways in the fields of education, social development and growth in the Mexican community living abroad. It is controlled by the Institute for Mexicans Living Abroad. Martinez-Inzunza was given the award because of the work that he has been doing in San Luis and in South County, generally with AWC and as president of the Rotary club.

The award was given to him because he helps out the community to build a “bridge” where “gaps” exist, as Martinez-Inzunza said. As for future plans or goals, he says “I want to continue at a place where my presence is needed, and to use my gifts so that I can help others succeed.”

Martinez-Inzunza received the Ohlti award in recognition of his service to the Mexican community.

Martinez-Inzunza has helped to open the College to the middle schools, so that students can enroll in college classes and preview college life. Also, since the college opened another center next to the local high school in San Luis, it has been offering more classes that are available to the public. A variety of classes are now offered in many academic areas from morning to night, whereas in the past, they were offered only in the mid-afternoon with limited subjects.

Martinez-Inzunza takes on leadership roles and assists other people so that they can develop their own personal roles as well. He works with the San Luis News, a local newspaper, so that every Friday it dedicates its center pages to education; he started this process and writes a column for it. He works with other schools to gather and publish information in the newspaper so the public is informed of the educational opportunities around them.

The word “Ohtli” means “pathway,” or “a parting”, such as wishing someone a good path in the future. The award is given to people who, through their daily lives, are good examples of what it means to create opportunities for others.