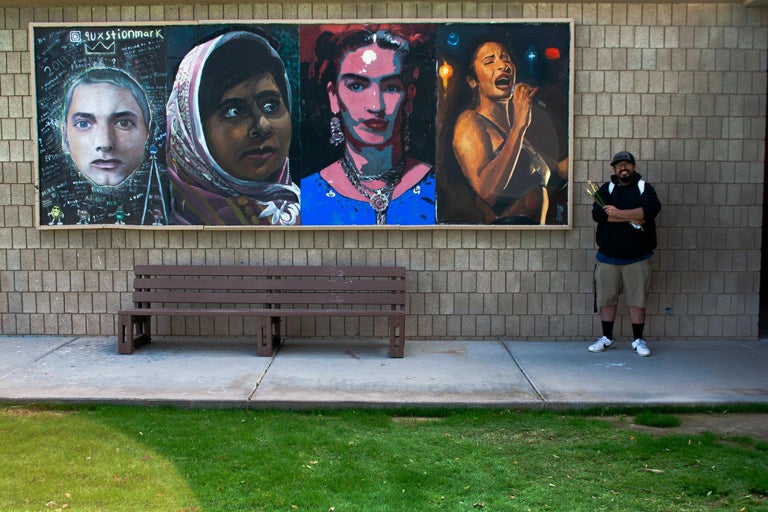 Art in the heart of a pandemic

Art has no boundaries.

Despite the global coronavirus pandemic, students at Arizona Western College demonstrate their skills at an exhibit in the Art Gallery on the Yuma campus.

Ricardo Hernandez, 29, is one of those displaying original art straight from the depths of his mind. As a way to improve his designing skills, he set out to improve his drawing skills and quickly learned that he had a passion for drawing and painting.

“I know it sounds crazy, but this all started after I had lost some weight and wanted to modify and customize my clothes,” says Hernandez.

His acrylic painting St. John the Baptist in the Wilderness with A Head has a classical tone. The is pitch-black background has reddish highlights, and in the foreground stands The Baptist himself, partially covered in a red and white cloak, his right hand wrapped around a stick that holds the head of a bearded man, gray like a statue, with long hair.

“My inspiration for St. John the Baptist came from my love for classical art, mainly the baroque period where a lot of the greats came from,” he says.

In Dove Season – the only one of Hernandez’s pieces captured from life and the one he calls his most challenging – he shows that he is inspired by human nature, life and morality.

“The feeling they capture is like capturing our own mortality in the most beautiful way possible,” he says.

He mentioned that after seeing a similar painting in social media, he felt the urge to make one of his own.

“I tried to capture darkness, death and beauty all in the same piece.”

Self Portrait, by 18-year-old Daphne Rivera, is a pencil drawing of herself floating in a pool. Her hair, perfectly detailed, is pulled back by the weight of the water, and the shadows and blank spots resemble droplets of water on her face. The background consists of slightly disturbed water, darkened by shadows that bring out the face, whose eyes imitate opened windows allowing the entrance of morning sunlight.

The drawing serves as an analogy to her own handling of the Coronavirus pandemic.

The image is “almost similar to when you don’t know how to swim and you are thrown in the water,” says Rivera. “If you breathe and just float on water, you won’t drown. But if you panic and don’t control your breathing, you’ll drown. Once I understood the situation I was in, I finally was able to float.”

From an early age, Rivera has enjoyed the wonders of art. Until college, she never took a real art class, but she has found ways to use art to her advantage.

“It became a way to de-stress myself,” she says.

Many people who have some spare time during this pandemic might consider paying a visit to the AWC Art Gallery, which is open Monday through Thursday from 8:00 a.m. to 6:00 p.m. in room AB110. Gallery Director and Professor of Fine Arts William Blomquist reminds us, though, to stay six feet apart from others and wear a mask.