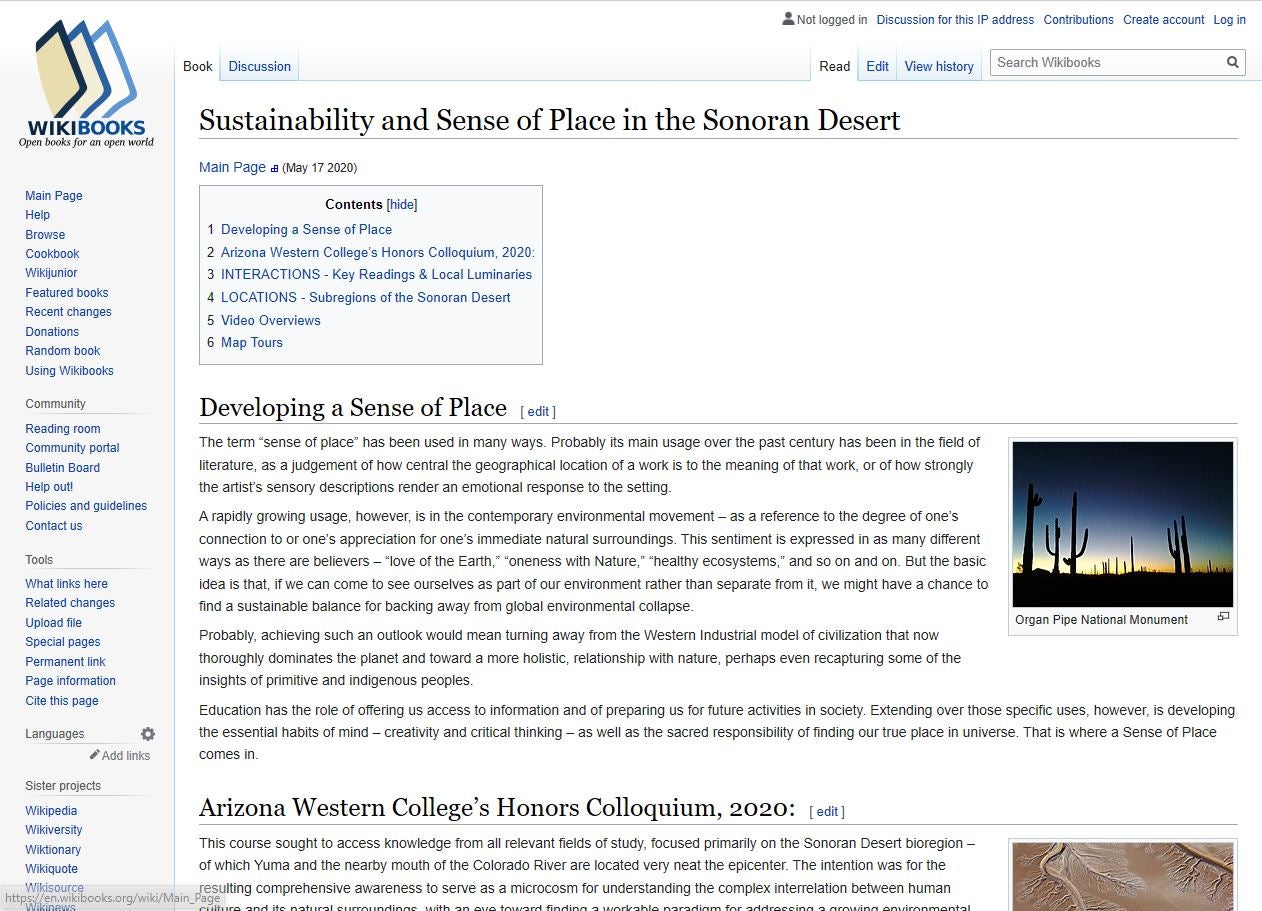 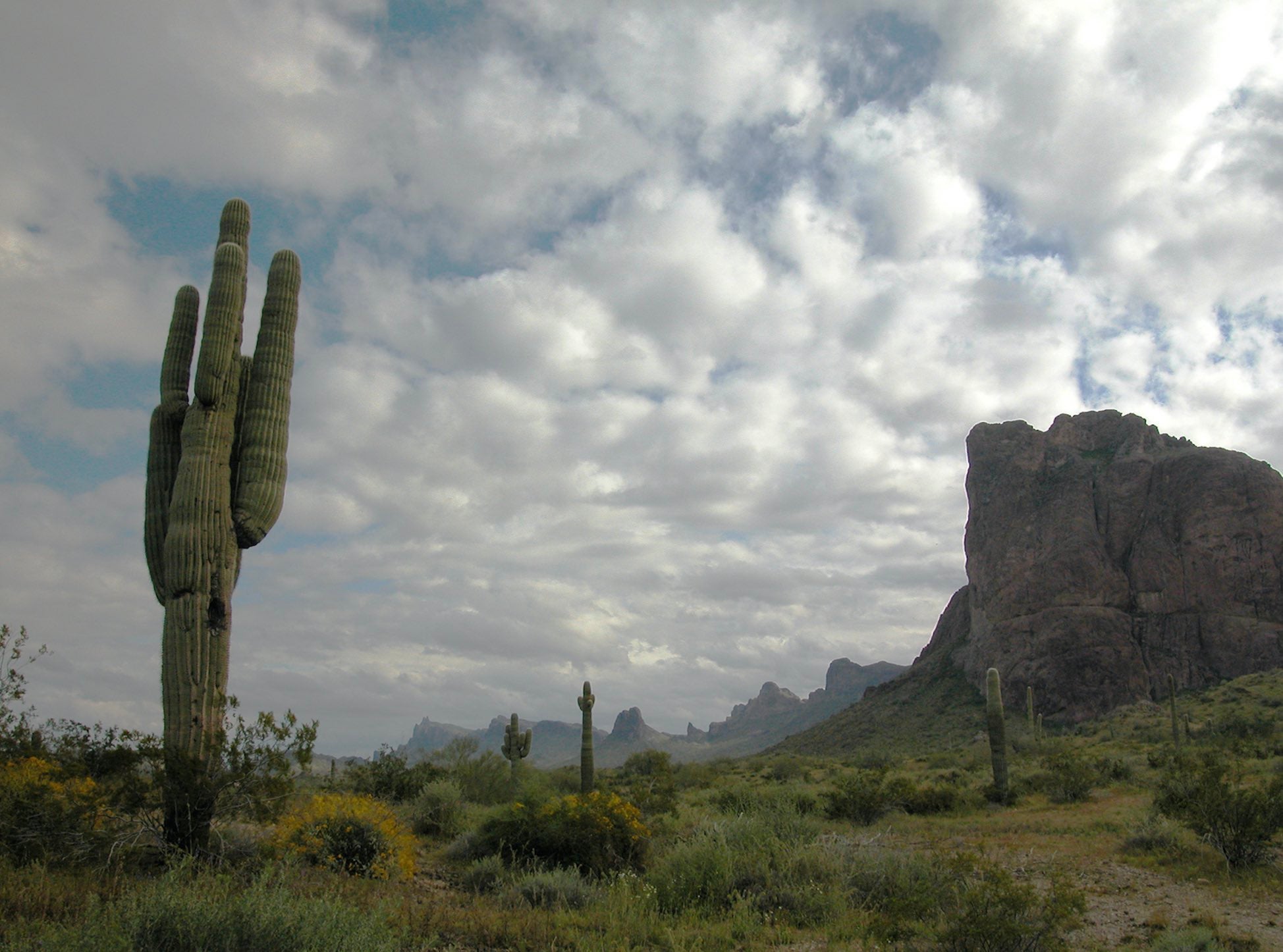 . Most of the essays, exercises and exams that student complete for their college courses end up at the back of their professor’s filing cabinet and ultimately in the recycling bin. Even if a project is tangible, like a ceramic pot, or public, like a performance, chances are slim that someone else will see it after the end of the term.

Not so with the 2020 Honors Colloquium at Arizona Western College, which left its legacy in the form of a multimedia Wikibook, titled Sustainability and Sense of Place in the Sonoran Desert.

- A collaboration on many levels -

“This course sought to access knowledge from all relevant fields of study, focused primarily on the Sonoran Desert bioregion – of which Yuma and the nearby mouth of the Colorado River are located very near the epicenter,” according to the web site.

“The intention was for the resulting comprehensive awareness to serve as a microcosm for understanding the complex interrelation between human culture and its natural surroundings, with an eye toward finding a workable paradigm for addressing a growing environmental crisis.”

The Colloquium, a team-taught, variable-topics course that is offered only once a year in Spring, is a requirement for graduation with Honors distinction from AWC. The process for choosing the topic is competitive, with pairs of professors developing a topic and submitting a proposal, which is then selected by the Honors Council, presently headed by Honors Director Light Bryant.

This year, the concept was a collaboration between two very different disciplines, one in the sciences, the other in the humanities. The two instructors were Jacob Gibson, professor of Environmental Science, and Michael Miller, professor of English and Communications Studies.

The course included components in the various biological and physical sciences, beginning with a survey of the role of geography and climate in the continual reshaping of the landscape. It also included an examination of the symbiotic and dynamic relationship among the species of fauna and flora in this exceptionally diverse bioregion.

The sense-of-place theme, is “a reference to the degree of one’s connection to or one’s appreciation for one’s immediate natural surroundings,” according to the Wikibook main page. “This sentiment is expressed in as many different ways as there are believers – ‘love of the Earth,’ ‘oneness with Nature,’ ‘healthy ecosystems,’ and so on and on.”

“The basic idea,” said Gibson, “is that, if we can come to see ourselves as part of our environment rather than separate from it, we might have a chance to find a sustainable balance for backing away from global environmental collapse.”

The course studied the impact of human habitation in the region and analyzed the evolving perception of the region in popular culture – art, literature, cinema, folklore, and so on. It also considered the role of cultural institutions – political, legal, economic, religious – in determining decisions related to such issues as land use, water allocation and environmental regulations.

The high point of the semester came when noted author, editor and speaker Gregory McNamee gave his presentation “Gila: River of History” under the auspices of the Arizona Humanities Council.

As with all other AWC curriculum, which had to be moved to a web-based format because of the COVID-19 pandemic, the Colloquium had to change gears in mid-semester.  But, according to its instructors, the scheduled activities scarcely missed a beat. What began as a face-to-face seminar simply moved to a series of interactive Zoom meetings.

As part of their collaborative work, the students broke into smaller groups to create Google Tours based on three main divisions of the Sonoran Desert, highlighting more than 60 specific locations and the various human threats to their overall health. These Tours were submitted as entries to the AWC Student Showcase – also forced to go virtual this year – with YouTube videos that introduced their projects. The Lower Colorado River Region group got to split a $1000 scholarship as a result.

The entire product can be accessed at https://en.wikibooks.org/wiki/Sustainability_and_Sense_of_Place_in_the_Sonoran_Desert.

“I’m so glad the students did so well,” said Bryant. “I hope it will serve as a reminder and inspiration to each of the students as what she/he can do in the future in college – and beyond.”