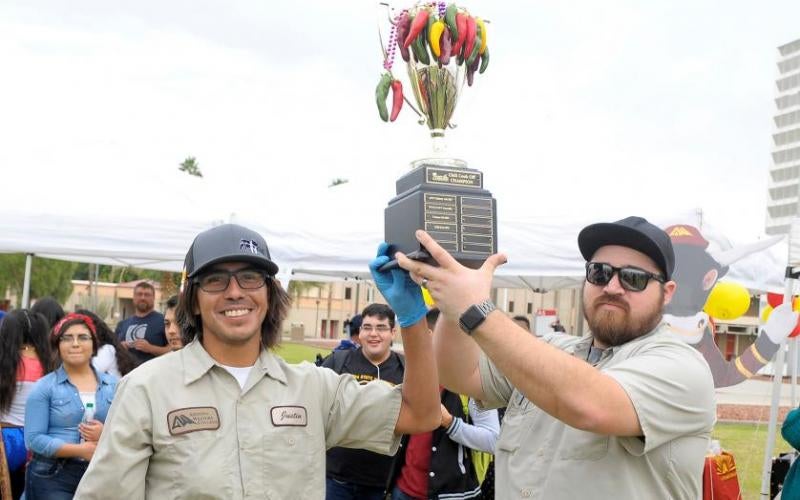 The 2017 winners of the annual Chili Cookoff show off their trophy. Courtesy of AWC Photo Services

Lunch and a show

AWC students were greeted by a towering inflated Andale the Bull upon entering the campus. Many snapped photos of him while others wondered what he was doing there. A glance around the campus answered their questions.

Decorated tables with tents littered the grassy area between buildings 3C and AC. The smell of food beckoned students to come closer and take in everything the event had in store for them.

The annual Chili Cook-Off was held Nov. 6 to raise funds for scholarships. To taste and vote for their favorite chili, attendees had to pay $5 for a punch card and one vote. Ceramic bowls made by the AWC League of Artists were also for sale for $10 and included a free bowl of chili.

AWC Foundation Coordinator of Development and Alumni Relations Gladys Anya has been running the Cook-Off for four years now, though the event has been around for nine years.

“The cook-off I inherited started off as a fundraiser for the Alumni Association,” Anaya said.

“It’s been really nice putting it together for the past four years because people want to come out, students come to participate in the golf cart parade and businesses can promote themselves by entering their chili,” she added. “It’s just a nice community event.”

The booths represented various clubs, organizations, departments and groups on campus. Each booth had attention-getting games or gimmicks. The Student Success Center booth had a wheel of questions in which every answer was the same, the Academic Library’s booth had rocks to color on and a big drawing that people could color with the markers provided.

The booths competing in the chili contest were uniquely decorated, with a few even choosing Disney movie themes to match the Golf Cart Parade.

Jodi Trout, administrative secretary to the associate dean of Student Conduct and Campus Life, was representing the Classified Employee Association at the booth called Pirates of the Chilibean.

Trout has been attending the Chili Cook-Off since she started working at AWC and claims it as her favorite event.

“It just brings together staff, students and communities,” Trout said. “It has a great purpose of helping to raise money for scholarships for students.

Other competitors were Campus Life with their booth called Alice in Chililand, Matador Ambassadors with their Un Poco Loco booth, Lock-n-Wood Facilities with Facili-Chili, the KEYS Program had their booth named Spicy Trio and lastly Chili Bytes.

Towards the end of the Cook-Off, the Golf Cart Parade began, presented by Campus Life, this year with a Disney-theme. Seven golf carts drove around the campus to make their way to the Cook-Off where everyone watched the parade in awe. Loud music followed the parade, which made it even more eye-catching.

Alongside the chili competition, the golf carts were also trying to win for best float. The winner would be announced after the Cook-Off winner.

This was Matador Ambassadors first time participating so their win came as a shock to them, but they were still grateful. They give credit for their win to Alena in Admissions.

“We thank Alena so much for making our chili,” said a member of Matador Ambassadors. “She’s super passionate about it and an amazing cook,”

The next category was the People’s Choice, which went to Chili Bytes.

In the competition for Best Float, in third place was CAMPSA’s golf cart with a Toy Story theme, the Matador Ambassadors Coco-themed cart got second, and first place went to S.O.T.E. with its Coco theme.

Andale the Bull stayed to the end, welcoming students and staff onto the campus for the rest of the week.