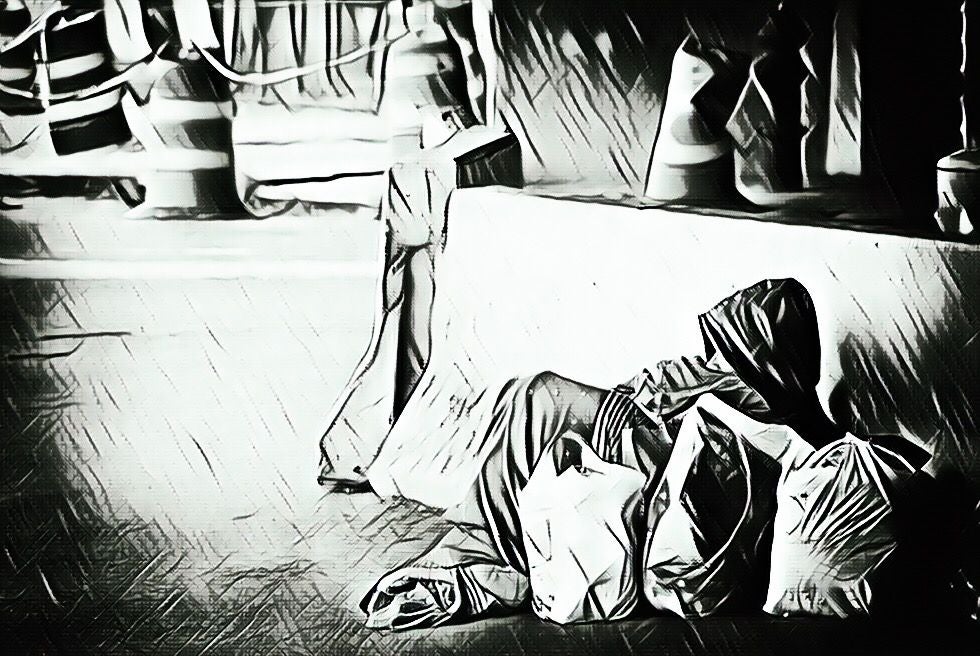 As I walked across the street toward him, I could see he had everything he owned right there with him. He was quite a bit thinner than the last time I’d seen him, but he was surprisingly well kempt. His hair was cut short and his beard, now going gray, was slightly scruffy but well-trimmed.

It had rained the night before, so he was hanging his tent and other belongings on a chain-link fence to dry. When our eyes met, I could tell he was embarrassed yet happy to see me.  I had known he’d been homeless for the last year or so, but that was the first time I’d witnessed it firsthand.

Chris and I met in high school more than 30 years ago. In fact, we were high school sweethearts. We dated off and on until our early 20s, then we took different paths. We talked occasionally through the years but didn’t really reconnect until about eight years ago.

At that point Chris was going through his fourth divorce and a custody battle over his only child. He had struggled with alcoholism a little in the past, but this threw his drinking into high gear. Before long, he had lost everything and was living on the streets in Florida. To someone who didn’t know him, he was a homeless drunk. To me he was a dear friend going through a rough time.

Over the past eight years, Chris has picked himself up, gotten his life back on track, and fallen back down many times.  He has tried for a fresh start in three different states, living with various family members and friends who wanted to help. I never would have thought that a person could have such a support system and still be homeless.

A couple of years ago he moved back to California, not far from where we went to high school. He had exhausted all other options and was now living on the streets full time. The story I told earlier took place in California about a year ago. His brother helped me find him while I was in town visiting family. Since then I have done my best to stay in touch. We text or talk on the phone, when he has one, and I try to visit every few months.

On one such visit I wasn’t sure where to find him, so I drove around town searching. It was early evening and the streets were full of business people heading home for the day. The weather was beautiful, so many were on bicycles. There aren’t a lot of homeless people in the area where he lives, but all the traffic was making the search more difficult.

I found him “flying a sign” asking for help near the freeway offramp. It broke my heart to see him standing there, looking like so many other homeless people I have shunned or ignored. I used to think that all those people needed was a desire to change and someone who cared enough to help them do it. I now know it isn’t that simple.

Chris hasn’t had a drink in over a year. He makes most of his money by fixing old bikes and selling them to other homeless people. He is respected and liked by those around him although he says, “There’s no such thing as a friend on the streets, just some that you can trust with your stuff.”

He sleeps in a tent in a secluded spot behind a power plant. Recently he returned to his “spot” after being gone for a few hours, only to find that his tent and some of his belongings had been stolen and everything else strewn about.

“Nothing lasts for long,” he said. “Things are always getting taken, and then the next few days are spent trying to replace what you had.” It makes saving money virtually impossible.

Through it all, Chris still has a heart of gold. Whether it’s giving away the only extra set of clothes he has or helping someone get out of an abusive relationship, he’s constantly looking for ways to help.

“There's always someone worse off than you are,” he says.

He is still the cleanest homeless person I’ve ever seen, and he seems to have mastered the way of life, as much as anyone can. I think that’s a big part of what makes getting off the streets so hard. Now that he’s sober, he has more options and a much better chance at being successful, but this is what he knows, and change can be scary. He admits the life isn’t easy.

“Each day is about surviving,” he says. “You make enough money to eat and get by, and then you do it all again the next day.”

Spending time with Chris has shown me that being homeless is a situation, maybe even a way of life, but it doesn’t define who a person is. He is still the kind, compassionate man he’s always been. Thinking of him living on the streets often brings me to tears, but he is quick to point out that even he has much to be grateful for.

Someday soon I hope he will accept our help and get off the streets, but in the meantime I am grateful for the lessons he’s taught me. Among other things, he has shown me that the homeless we pass on the streets are real people, all with a story of their own. We don’t know their struggles, and there is so much more to them than what we see.