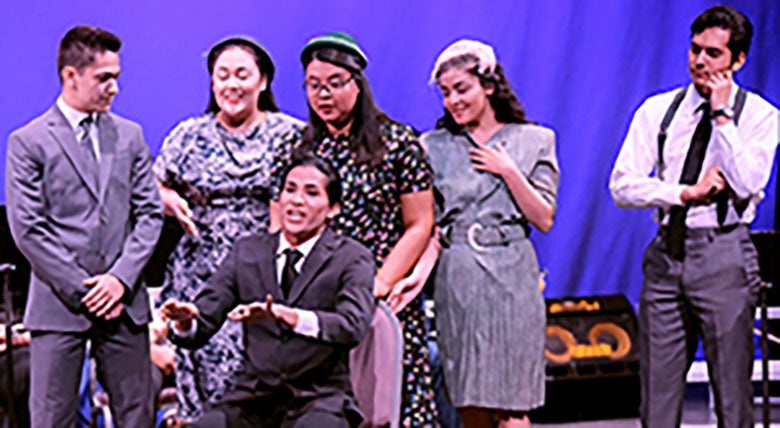 The Radio Active Players and other representatives of Arizona Western College Fine Arts joined forces for a touching celebration of works by the esteemed George Gershwin in their annual fundraiser on Feb. 10-11. In an hour-long display of phenomenal talent, the Theatre, Choir and Band departments showcased determination and passion for the arts in the same spirit that Gershwin is so famous for.

The show was a non-stop thrill to the end. The performance of the Theatre department invoked thunderous applaud and laughter from the audience. They segued nicely to the choir and band segments, rife with energy and flawless comedic timing. The show’s comedic take on Gershwin’s life and struggles perfectly encapsulated the comedy of his plays yet was not so self-aware or goofy that it turned into a parody.

A stand-out was Scott Gamble, whose sense of humor and professionalism proves that he was born to be an entertainer. The chemistry on stage was rich as the cast worked off one-another humorously with lightning-fast dialogue and great staging.

The choir and band segments were covers of Gershwin’s songs. The choir had a great sense of harmonic unity with vocal ranges that were dynamic and beautiful, invoking the sound of gospel.

The band showed professionalism in their craft. No single moment in their renditions were stifled by disunity or mistakes. The ranges of instruments in each musical segment made them different and distinct, doing justice to Gershwin’s original compositions.

There was a sense of thrill whenever the composer came up. The stage was illuminated by dark-blue lighting, which gave the composer a silhouette that looked like something from Fantasia.

The show closed with a beautiful rendition of “Summertime.” Near the end, a few students from each Fine Arts department introduced themselves and spoke about how much the arts mean to them.

Throughout the show, the performers revealed the importance of laughter and the beauty of sound which diminishes the everyday misery of the real world. They showed that their dreams are no different from those of their hero, Gershwin, for they want nothing more than to entertain, to enchant and to perform, for the betterment of our lives.