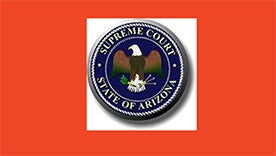 For the first time since 2005, the Arizona Supreme Court came to Yuma to offer a first-hand look at the judiciary process. Presided over by the five justices, including Chief Justice Scott Bales, the March 24 hearings were a special opportunity to educate students and the public about the way in which the High Court conducts its oral arguments in a real-life case.

Seating was limited in the Gila Ridge High School auditorium, and special consideration was given to Arizona Western College students in the classes of Professor Adam Ekin and Gary Newmeyer, professors of Political Science and Justice Administration, respectively.

"I wanted to find out both sides' opinions on the two cases we heard," said Administration of Justice major Roberto Brassea. "You rarely get a chance to listen to a Supreme Court case."

"My long term goal is to be a lawyer," said Kaitlynn Lowry, another Justice Administration Major. "I wanted to see how the system works, and this is really interesting to me."

Oral arguments lasted about 40 minutes each, with 20 minutes given to the defense and 20 minutes for the State. The hearing were followed by a rare chance for a Q-and-A session with the five Supreme Court Justices, where views were shared concerning Internet privacy, the media, immigration and education. However, the main focus during this portion of the evening was showcasing the arguments and explaining the judicial process and legal terminology of the oral arguments.

Terms that are familiar on the news, in courtroom dramas and in crime shows were explained, such as "dismissal without prejudice" (The case is completely done, and neither party can bring it back to life), "probable cause" (Police cannot search homes unless there is evidence of a crime), and "Exigency" (something out of the ordinary that needs to be done without delay).

"The idea that you can learn and witness something other people haven't is tremendous," sais Addie Santillan, an Anthropology/Philosophy major who heard about the event through Ekins, her Political Science professor. "I guess it's just the social science major in me."

"This was a great opportunity for me," said Leonardo Flores, an Administration of Justice major. "How many can say they have been to a Supreme Court case?"