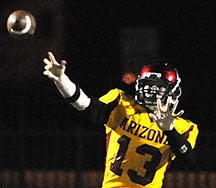 Ever want to get inside the quarterback helmet for a glimpse of what's on his mind?

Hosick was born in Chicago, Illinois, but was raised in Kansas City, Missouri.

At a very young age he began to develop an unshakable love for sports.

"I believe the lord makes everybody for a different reason," says Hosick. "Some people were made to play instruments, some were made to communicate with others. I believe that the lord gave me the tools and the abilities to use football as an area of influence."

It wasn't until the day Hosick turned 12 that he realized he wanted to keep playing sports in order to influence other people's lives.

"My dad said to choose two sports I wanted to keep pursuing, so I said football and baseball," Hosick explains. "But then he said ëNo, you're going to wrestle, too!'"

After graduating from high school, Hosick was accepted to the University of Missouri, where he had a spot on the football team, but he was red-shirted for the season.

"I could've stayed at Mizzou and waited for my chance to be a starter," he said, "but I didn't want to wait that long."

Trent moved on to attend Northeastern Oklahoma, a junior college where he had more playing time as a starter. He had a great season, and the next thing he knew he was moving to Arizona.

"I found out I was leaving on a Monday, and Tuesday night I was practicing here," he said. "It wasn't difficult moving, but I had an abrupt feeling. We made the decision to come out here, and I feel like it was a blessing in disguise."

Hosick has had a tremendous season with the Matadors. From being the starting quarterback in college to having a wonderful family who supports his life goals and every aspect of his life, though, most people might think he has it easy.

However, at the age of 13 he was involved in a bad car wreck that almost ended his life. While heading to wrestling practice with his mother, a speeding car ran a stop sign and blindsiding them, and they flipped several times.

Hosick was flown to a nearby hospital where he was treated for a broken leg and a broken jaw. During this hard time, it never crossed Trent's mind that he would never be able to play sports again.

Months later, his dad suggested he switch positions. As a kid, he played running back, but after the accident he started playing as a quarterback so that he would get fewer hits.

Hosick says that, if he gets the chance to make it to the next level, he certainly will take it.

"I know it sounds clichÈ, but if you find something that you love, make a living out of it."