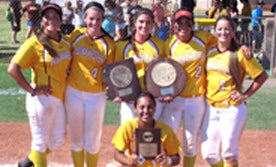 The heartbreaking end came all too suddenly for the Arizona Western College softball team. These fearless women had found ways to come through all season long and, in the end, fell just shy of their ultimate goal -- a national championship.

After a terrific regular season, one which saw the team go 45-7 overall and 39-5 in conference play, the Lady Mats hosted the Region 1 tournament in the friendly confines of Charlie Dine Field on the AWC campus.

"We are really excited to be hosting the regional tournament this season," said AWC Head Coach Nikki Bethurum. "This was one of our team goals from back in January. All four teams in the tournament are top caliber teams, so all fans coming out to watch should be in for an exciting two days of softball."

Arizona Western, which hadn't lost consecutive games all season, opened the tournament against Pima College with a 3-0 win. AWC then had to face an equally talented Eastern Arizona squad that had given the Lady Mats all they could handle in the final series of the regular season.

Another nail-biter ensued, but AWC held on late for a 5-4 victory and a chance to play for the Region title. Facing Pima again for the championship, AWC shut out the Lady Aztecs 6-0 and advanced to the NJCAA National Tournament for the first time since 2001.

April Marquez was named the tournament MVP after going a combined 4-for-8 with four runs scored, 5 RBIs and two homeruns.

The Lady Mats arrived in St. George, Utah, with all the momentum in the world after the region tournament win and also having been selected as the top seed for nationals.

"It's a great honor to be the number-one seed," said Bethurum before the tournament. "We know we have a target on our back as the one seed, and everyone will be gunning for us. We just have to play our game, and we should be fine."

AWC started off the tournament in grand fashion against the 16th-seeded Spartanburg Methodist Pioneers out of South Carolina. With the game tied at 1-1 in the ninth inning, Breeya Howells stepped to the plate with the bases loaded and no outs and launched a grand slam for the walk-off 5-1 victory.

Starting pitcher Hayley Miller was impressive all game for the Lady Mats.

"Hayley threw really well for all nine innings," said Bethurum. "She got strikeouts when we really needed her to, and she got us out of numerous jams."

But this is where the movie would end, and the filmmaker wouldn't bother showing a couple of disappointing loses to Central Florida and Southern Union State to bounce AWC from the tournament.

When it was all said and done, the Mats had finished with a remarkable 49-9 record. They had two players named First-Team All-Americans (Robyn Alvara and Bethany Olea) and another five players (Alvara and Olea as well as Ashlee Rex, April Marquez and Summer Ehrig) named to the All-Region team, and they had set a number of team records in the process.

"This is the perfect ending to a great season," said Bethurum. "To have two of our players recognized as All-Americans and then as 1st Team All-Americans is great.

"Robyn had a great season as she broke the all-time school record for homeruns in a season and for her career here at AWC. Bethany was inches from breaking the single season batting-average record, and we hope her strong play continues into next season where she will look to repeat as an All-American."

This lineup of the AWC softball team will be fondly remembered for a long time.

"Even though our season is over, it's good to see our players still being recognized at the national level," said AWC Athletics Director Jerry Smith. "These players fought so hard all year long and put together a season that will go down in the record books as one of the best ever here at AWC.

"It's always very exciting for our players, coaches and athletic personal to see these talented young student-athletes get the recognition they deserve from those outside of the region."