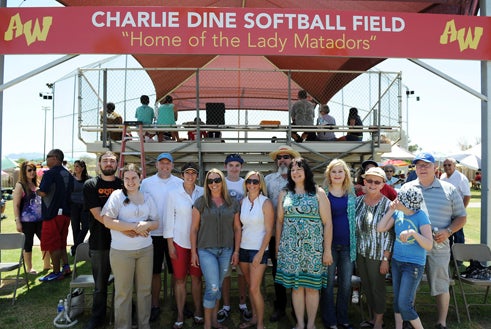 Dozens of former players, colleagues, friends and family of the late Charlie Dine joined in celebrations on Saturday, April 19 as the Matador Softball field was renamed in his honor.

In preparation of the event, Arizona Western College Athletic Director Jerry Smith said, “We are honoring former two-time National Champion head coach Charlie Dine as he was elected into the NJCAA Softball Hall of Fame.”

Charlie Dine arrived in Yuma in the spring of 1970 where he was a member of the AWC family for approximately 27 years. During that time he had a major impact on the entire AWC campus. Charlie Dine was also one of the early leaders in the Arizona Community Athletic Conference and the Western States Football League.

Charlie Dine served 10 years as Athletic Director and then from 1982-1991 as AWC Head Softball Coach. The softball team won the NJCAA Softball National Championships twice in 1983 and 1987, and was runner up in 1986. During both championship years, Dine was named NJCAA National Softball Coach of the Year; he ranks ninth as the Winningest Softball Coaches in NJCAA history with 248 wins and 99 losses. He has been a leader in making Yuma one of the recognized leading forces in women’s and girls’ softball in the nation.

During the field re-naming ceremony, members of the Charlie Dine family received a commemorative plaque and ring marking his induction into the NJCAA Hall of Fame earlier this year.

Dine’s daughter, Desi Foster, remembers her dad coaching her in swimming, with great results, before the family moved to Yuma for him to join the ranks of AWC.

“Dad loved coming to work here,” Foster said. “He was very proud of this program.”