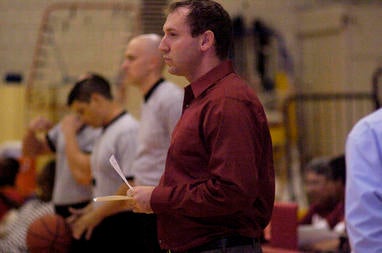 Inside the fitness center at Arizona Western College, with the sound of weights crashing and treadmills humming, Charles Harral sits on a recumbent exercise bike getting some quick cardio in.

Practice has just finished for the AWC Men's Basketball team, and Harral, the head coach, undoubtedly is analyzing the details of the team's workout, just as the bike monitors his own effort.

Monitoring the Mats this year has not been much of an issue for Harral, who took over this season for long-time coach, Kelly Green. This gritty, hard-nosed group has demonstrated their tenacity in every game this season.

"We have not lost a game since November 19 by more than four points," says Harral.

They also have more than a few impressive wins on the season, including a thrilling overtime victory over the number-one ranked team in junior college basketball at the time, Monroe College (NY).

Later, in the same tournament, against Three Rivers Community College (MO), they were defeated by a 3-pointer at the buzzer in another instant classic. Three Rivers is coached by Gene Bess, two-time national Coach of the Year, and the winningest coach in junior college basketball history.

The Matadors have a decidedly international flavor. The starting frontcourt, Mateus Oliveira and Renan Lenz, both 6'10" Brazilians, are two of the four returning players for Coach Harral. The other two, Jimi Hayakawa, and Daichi Taniguchi, both from Japan, are key reserves.

Lenz, who was named conference Player of the Week in January, has gotten the attention of scouts from some prestigious NCAA basketball programs and almost certainly will be playing Division-I basketball next year.

Although the Matadors start three freshman guards in the backcourt, they appear to be an experienced bunch. Lester Medford, a lightning quick point guard from Tucson, is the catalyst that makes this team go.

"We are as good as Lester and Renan are," explains Harral. "They are two key ingredients,"

The other two starting guards, Las Vegas, Nev., native Aaseem Dixon and Marvin Whitt out of Birmingham, Ala., have also been tremendous as freshman.

"When Marvin and Aaseem shoot the ball well, we're a lot better, but I think the key to our team, is our defense," says Harral.

"I think it's going to be all about our outside shooting because of our size a little bit, on the perimeter. But defense will give us a chance."

Going all the way

Harral knows his team has a chance to go a long way this year: "I have really good kids on this team and they're bought in. They do well, not only in the classroom but in trying to decipher what I want them to do on the floor, and then executing it."

Coming down to the wire in the ACCAC season, there's not a lot separating the top teams. The parity in the conference this year promises to make for an exciting post-season, and the Matadors feel they have a golden opportunity to add 2012 onto the banner hanging in The House.

Although this is his first year as a head coach, Harral has quite a pedigree when it comes to coaching championship basketball teams. At almost every stop in his assistant-coaching career, the teams have won championships, so he knows what it takes.

"The difference between all five teams on the D-I side of our conference is about two points in my opinion," says Harral. "The team that plays the best defense and turns the ball over the least will end up being the champion when it's all said and done."