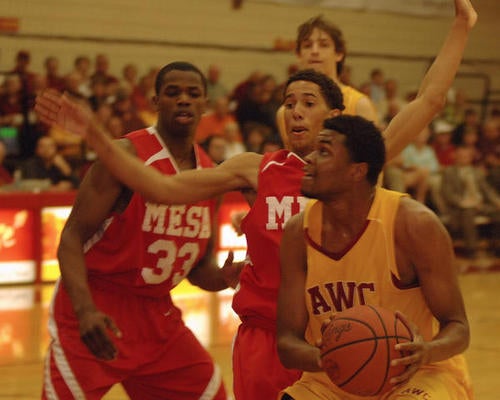 Led by Head Coach Kelly Green and his staff, the Matador men's basketball team was young, consisting of five sophomores with the rest being freshmen, but youth did not stop the team from building a 15-4 record to kick off the season. Following the early success, however, was a 3-game losing streak consisting of losses to Glendale Community College, Eastern Arizona College and Mesa Community College.

After correcting mistakes made in the losing streak, the Mats went on to win 7 of their next 8 games to close out an impressive regular season with a record of 22-8.

AWC was then granted the number-one seed in the NJCAA Region I Playoffs. The first-round matchup against Mesa proved to be a nail-biter, concluding with a score of 63-61. Advancing from there, the Matadors faced their next opponent, Cochise College, whom they beat February 16 by a score of 65-59 to clinch the number-one playoff seed.

As the clock ticked down to 14 seconds left, Xavier Blount of Cochise College drained a 3-pointer, eliminating Arizona Western's title hopes for the 2010-11season. By a score of 68-72 the Matador's season had come to a halt.

Despite a 23-point performance turned in by Victor Holloway, the Matadors fell 4 points short of the region championship as Cochise won their second straight post-season upset victory.

Scott also shot an astounding 80 percent for the stretch. In two games near the end of the season, Renan Lenz registered stat lines of 12 points, 9 rebounds and 7 blocked shots against Cochise and 12 points, 12 rebounds and 8 blocks against Chandler-Gilbert.

Losing two of the three top performers in Scott and Holloway will leave some gigantic shoes to be filled. Throughout his career at AWC, Coach Green has always brought his team together, directing them to play championship-caliber basketball.

Unfortunately, Coach Green has decided to retire from AWC and go on to coach at a college in Colorado. One thing is certain, however; the team will continue to be strongly supported by the Matador campus community.